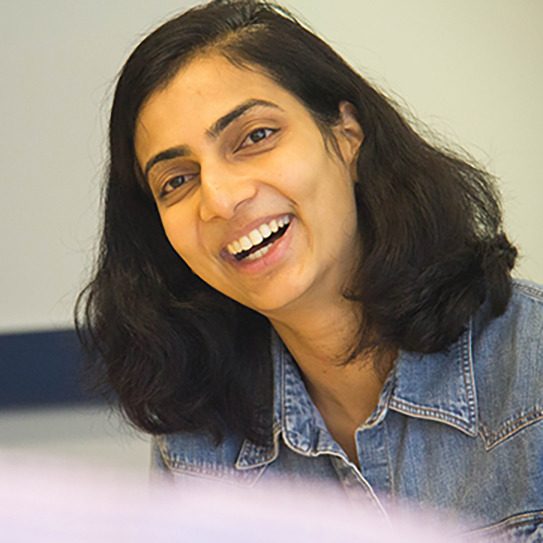 From the very beginning, Remya's time at Amazon has been all about seeking chances to learn. "Right away I got involved in a bunch of different tasks and activities," she says. "So even though my official title was business analyst, I got to do a lot of product management, program management, everything. It was a perfect role for me to get started in the company."

After three years with the Kindle content team, Remya was craving what she describes as "ambiguity": the sense of heading into brand new territory with lots of unknowns. She moved to the team that invented Dash, a handheld scanner and voice-recognition device you keep in your kitchen and use to add items to your AmazonFresh grocery cart. "When I joined, they had begun trialing Dash with a small group of customers, and I was tasked with helping the team define how the device was working," she says. "We started getting feedback that customers loved it. So we were like, 'Okay, what's working? We need to understand that. What's not working? We need to understand that.' That's what I started doing as soon as I came in."

One big reason Remya's current role on the Dash project offered a chance to learn is that she'd never worked on a hardware team. She says she thrived "by admitting to not knowing anything. That's the first step. I was very open with my manager and the entire team. I said, 'I've never worked on hardware before. I'd love to learn.' And then I kind of had to prove to them that I can learn quickly."

Remya says her most potent learning experiences at Amazon have come in meetings with top executives. "What makes them really good leaders is that they know what question to ask. That's a skill that I'm looking to develop. And then their line of thought after they ask that question: they have follow-ups, they have feedback, they get excited, they brainstorm with us as a team."

She continues, "If learning is the most important thing for you in developing your career, you should come to Amazon. I don't think there is any other company where you will learn so much in the same timeframe. I've heard this from a lot of people. And this might sound a little cocky, but I think I would feel comfortable going and running an entire business in a different company based on my experience at Amazon. I don't know if I would be able to say the same thing if I'd spent five years somewhere else."

Remya, who recently returned from maternity leave, says she's happy to be back. "I'm sleep deprived, like most new moms, but I am actually loving being back," she says with a laugh. "There are lots of important decisions being made regarding the project and the product and the teams, and I'm glad I'm able to be part of those discussions. I'm doing it because I love it."